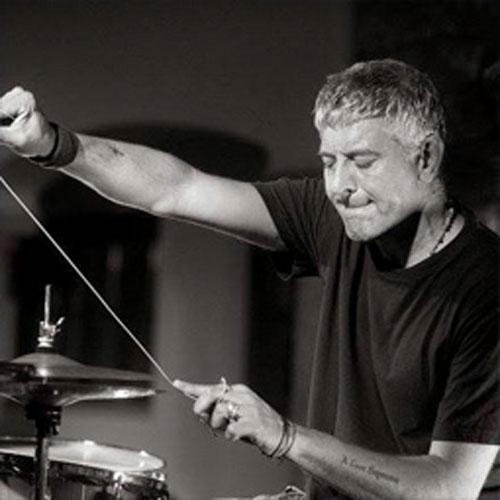 Ivano Nardi is a drummer, performer, composer and professor. In certain cases, a visionary and generous organiser, Ivano is an underground character and musician who doesn't like the term “hidden”. The Roman jazz artists form a certain group comprised of different nationalities, whose members know very well their personal and passionate drum playing; that of a sharp, noisy, occasionally “theatrical” style, but with a precise sense of tempo and form [quadratura]. The refined timbres of Ivano Nardis set, the expressive power - or, even, violence, at times - of his approach, shape a drummer comparable to Tony Oxley, Milford Graves, Sunny Murray. Being always active socially, and especially since the '70s (Dizionario Enciclopedico Del Jazz/Curcio Ed.), he has achieved a series of collaborations, which include Mario Schiano, Gaetano Liguori, Steve Lacy, the 'Cadmo' of Antonello Salis, Don Cherry and Lester Bowie. Nardi has also worked with many Italian jazz musicians; from his close friend, Massimo Urbani to Larry Nocella, from Sandro Satta to Maurizio Giammarco, as well as with Vittorino Curci, Pasquale Innarella, Marcello Magliocchi, Gianni Lenoci, Roberto Bellatalla and many others. He participates in various events, festivals and projects: Radio 3, 'Jazz a Confronto' music album series, Clusone Jazz Festival, Bolzano Jazz Festival, Arcosoli Jazz, Lovere Jazz, Controindicazioni, Ceglie, Musica Sulle Bocche, Centro D'Arte di Padova, Sguardi Sonori, London Biennale Opening. Apart from his solo career, Ivano Nardi has also been performing for several years with his jazz quartet 'Open Door', the duo 'The Better Way' (formed with Marco Colonna), the 'Ghost' trio, while he often fuses his drum sticks with artists such as Eugenio Colombo, Angelo Olivieri, Giancarlo Schiaffini, Gianni Lenoci, Silvia Bolognesi. (You can hear the latter on the beautiful album-project, “If Not”, released a couple of years ago, and dedicated to Mario Schiano). To such an artist, of the time of “A proposito di Jazz”, he would like to dedicate a portrait, retracing some of his latest recordings he made as a drummer and as an 'underground' character, which he recorded live (for various record labels, such as Red Record, Rai Trade, Terre Sommerse, Horo, Setola Di Maiale, AFK).