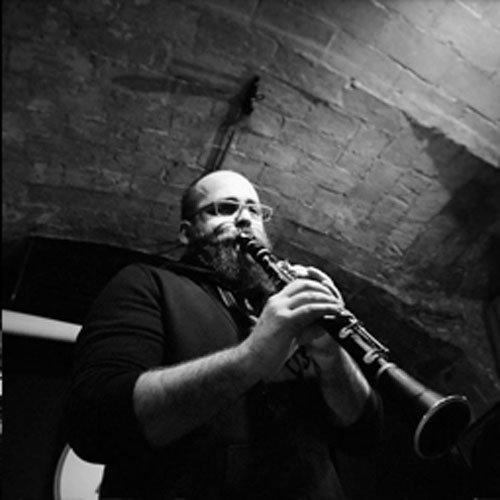 Active for nearly twenty years in the most varied musical environments, Marco Colonna developed his musical voice under the leadership of Piero Quarta and Gaetano Zocconali. He studied in the Conservatory of Frosinone and attended seminars with Alfredo impulliti and Achille Succi. He specializes in performing contemporary music with Maestro Harry Sparnaay. He is also involved in music for theatre, film and documentaries in collaboration with Rai Trade and with the companies Mediterranean Centre of the Arts, Artes, Small Brancaccio and L'Orologio. A number of works for solo bass clarinet and contrabass clarinet have been dedicated to him by composers such as Giorgio Colombo Taccani, Dan Di Maggio, Sofia Mikaelyan and Shigeru Kan No. He has participated in the Venice Biennale and the Five Days of Milan Festival with a program of premieres of works for solo contrabass clarinet. In the field of jazz sounds he has collaborated with Andrew Cyrille, Gebhard Ulmann, Omar Tamez, Ivano Nardi, Michele Rabba, Silvia Bolognesi, Eugenio Colombo and many others. Furthermore, he has participated in numerous International Festivals such as Roccella Jonica, Music Sulle Bocche, Visiones, Encuentro of jazz and Musica Viva. He is also active in the folk music scene: he plays with the group Acquaragia Drom, with whom he has recorded the album “Rom Kaffè” and toured in Mexico, the U.S., Malaysia, France, Spain, Portugal, Greece, Germany and Italy, participating in major festivals like Sziget World Music (Hungary), Rain Forest World Music Festival (Malaysia ), Rome Meets The World and the NYC Gipsy festival. In 2012, the magazine “Musica Jazz” included him among the best young talents of Italian jazz. Luigi Onori dedicated a page to him in the newspaper “Il Manifesto”, calling him “One of the best musicians of his generation."